You learn a lot about people from their bedrooms. Some have TVs or books or laptops. Some have blackout curtains or stuffed animals or bottles of pills. But, vast as human experience is, one thing is consistent: Everyone has once-worn clothes strewn on the furniture.

Why? In one sense, it’s obvious. The clothes are clean enough to wear again, but it feels wrong to put them back with the freshly washed ones. Since there’s no designated place for worn-but-clean clothes, we improvise.

But in a deeper sense, it’s mystifying. Why is there no dedicated place? No one is happy with clothes everywhere. Why isn’t there a standard solution?

I don’t know. Many people think that you’re supposed to wash every garment every time you wear it and some (nutcases) actually do this. Otherwise people don’t think about it aside from feeling vaguely guilty.

Whatever the reason, there’s an easy solution. Behold: 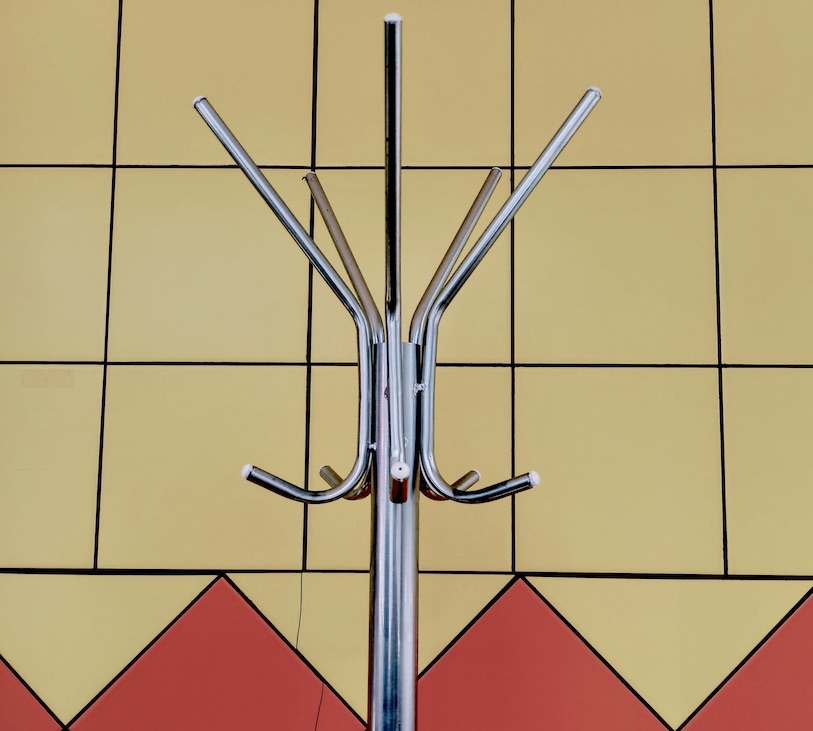 You can put a coat rack in your bedroom. Or put up some hooks. Or reserve an area of your closet. Whatever you do, put your once-worn clothes there without guilt and watch a tiny percentage of the stress in your life disappear.

Yes, the benefit of this is small, but the cost is very small, which makes this the kind of thing that’s worth doing.

Are there analogous solutions—“coat racks” for other problems in life? Sometimes, but not always. There is an analogy here, but it’s at the level of the problem, not the solution. 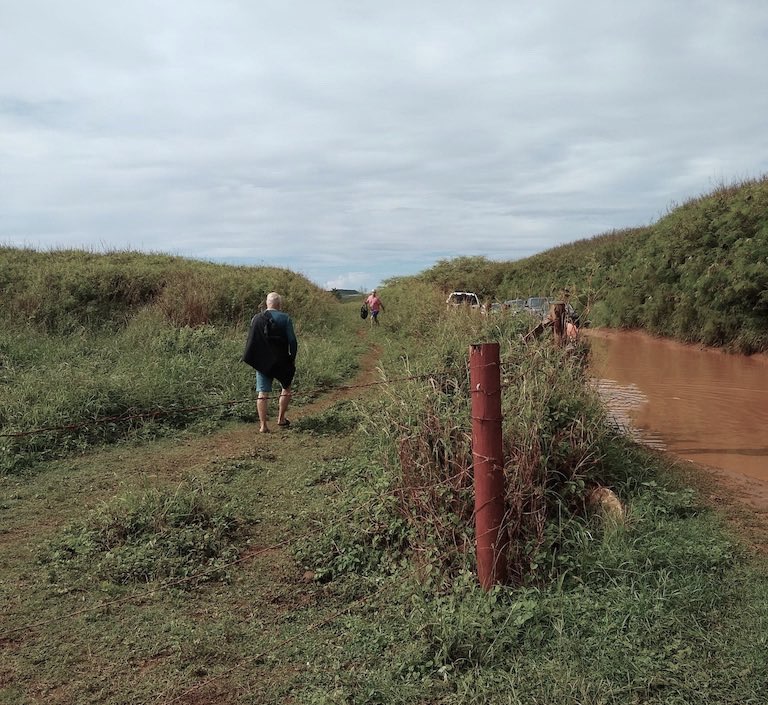 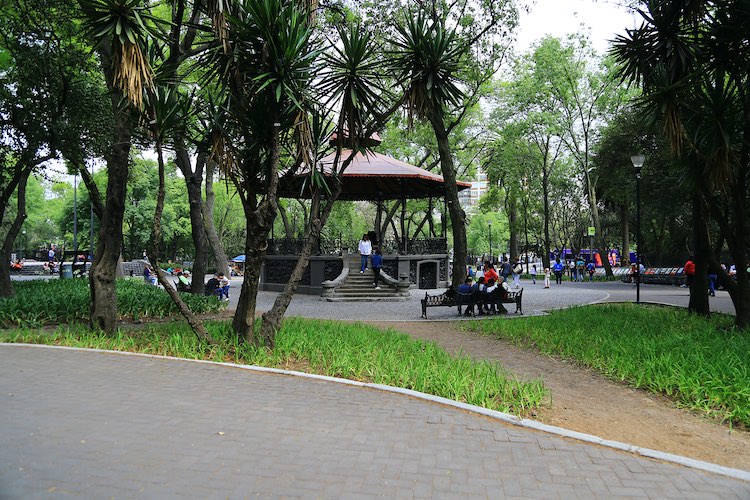 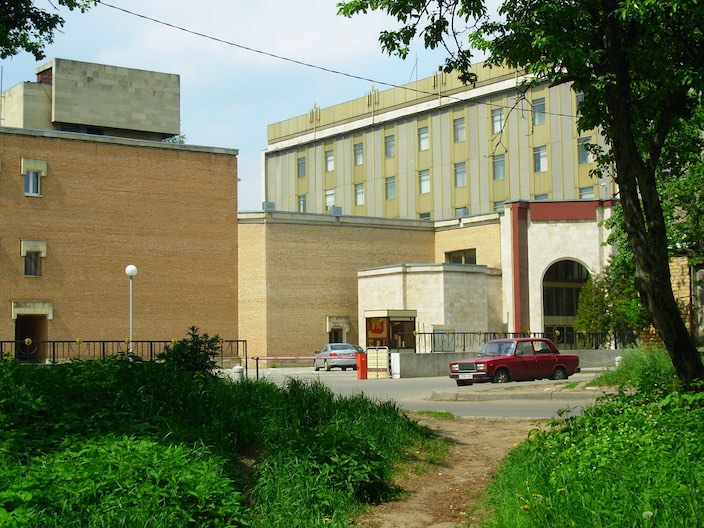 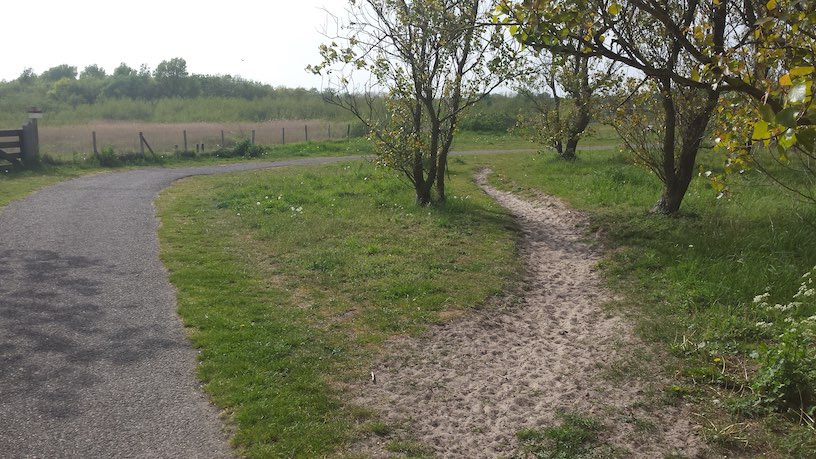 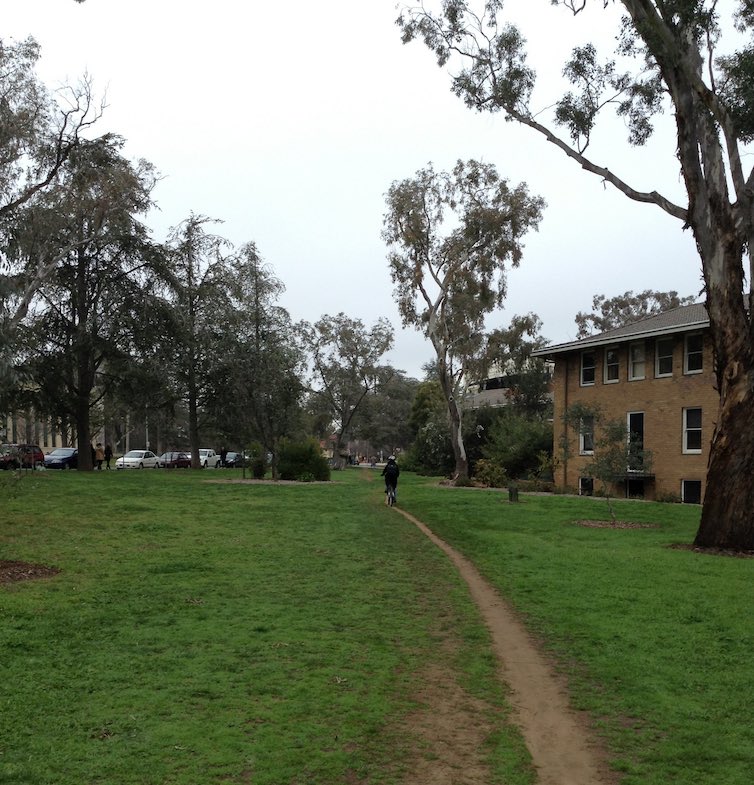 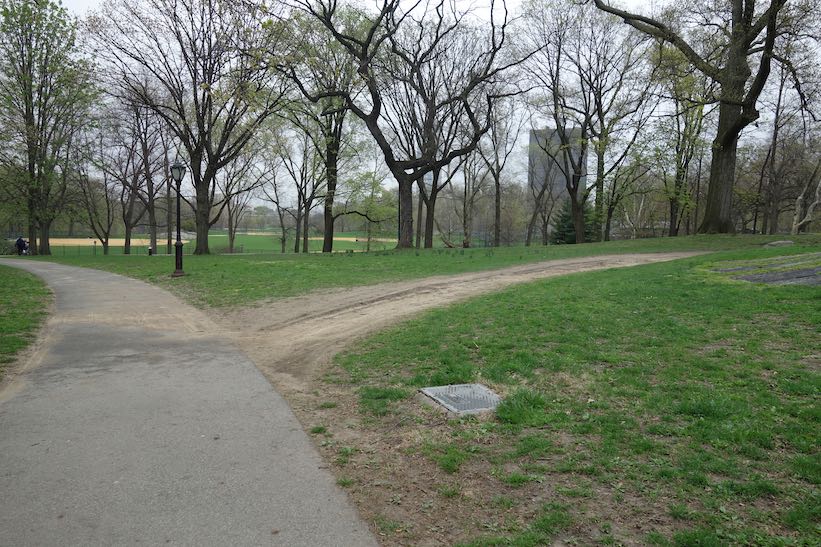 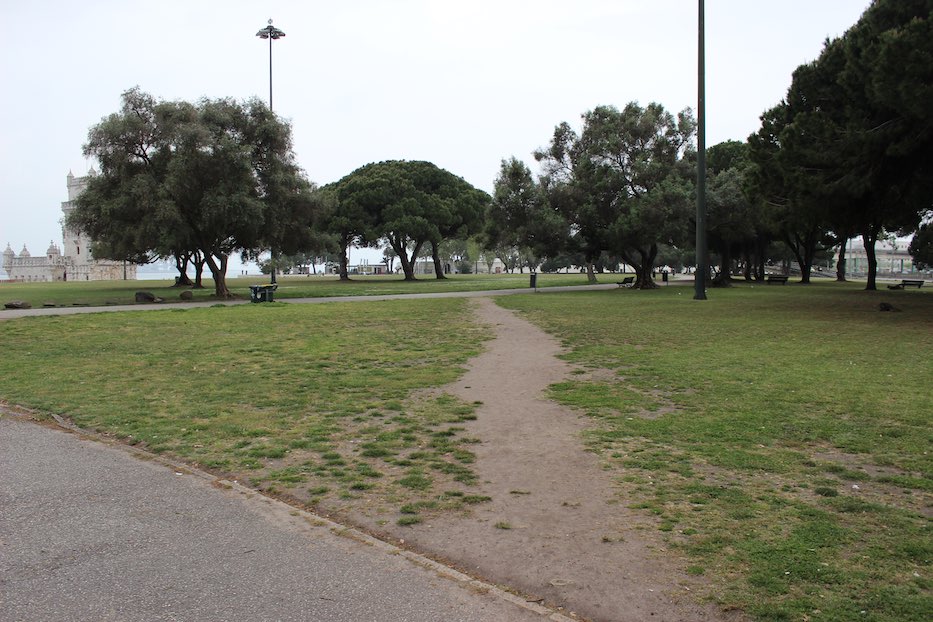 These are desire paths. Many colleges have a story that when they were first built, the designers left grass everywhere at first and just paved over the footpaths that were organically created.

As far as I can tell this never actually happened. (Would you open a brand-new campus and let people tramp around in the mud?) But whatever. Much the same thing happened gradually over time. Here’s what Michigan State University looks like from the air today. 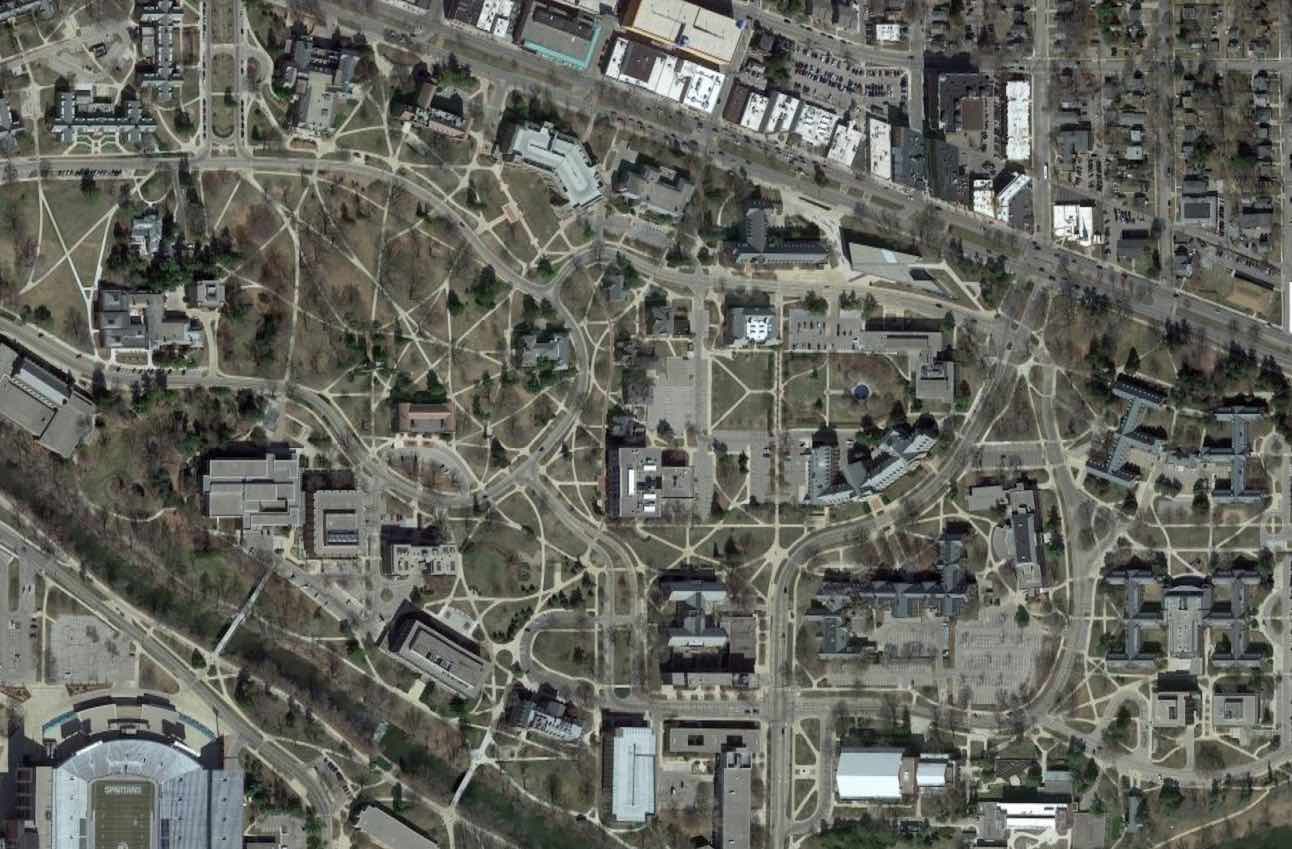 For our purposes, what matters is the analogy: A desire path is a sign that the way things are currently set up, the easiest thing to do isn’t the “right” or intended thing.

It’s worth giving this situation a name because it helps to think about solutions. When you’ve recognized a desire path, what should you do? In the previous example, we accepted that we were going to follow the desire path of leaving clothes out and we “paved the path” by getting a coat rack.

Many couples seem to have the same argument repeatedly with each person saying the same things that the other person doesn’t want to hear.

You can see this as a desire path: Both people are following a strategy that they think gives them the best (albeit bad) chance of the outcome they want.

How to get out of this situation? One solution is to agree on a set of fair fighting rules. There are many of these. Some are intuitive (though not necessarily easy) things like not yelling. Some are more advanced, like saying an argument should be limited to at most five rounds, each of which consists of presentation/response/reiteration/possible acceptance/acknowledgment phases.

Lesson: Here again we accepted that it was hard to stay on the intended path (not arguing) and instead made the desire path better (made arguments more productive).

For years, I thought I should vacuum. But since vacuuming wasn’t fun, I only rarely did it after making a desperate effort and mostly my vacuum served as a monument to what a failed and pathetic human being I was.

And then, on one beautiful day, I was borrowing the apartment of a friend who was out of town. I thought I should clean before I left and discovered she had a cordless, battery-powered vacuum. As I switched it on, clouds parted and trumpets sang from the sky. It wasn’t quite as powerful as a normal vacuum, but it was painless. After I bought one, I was suddenly able to vacuum whenever I wanted, like a real person, so easily that the entire issue lost salience when I was in the mood for self-loathing.

Lesson: Sometimes you want to make the intended path (vacuuming) better rather than changing anything about the desire path (not vacuuming).

It seems like half the people I know have a copy of War and Peace on their nightstand. They’re trapped in a cycle like this: They “need” to finish War and Peace. Except they don’t actually like reading War and Peace, so they don’t. But they’re “supposed” to be reading it, so they don’t start another book, and every night they just look at whatever the algorithms throw on their phones. Years pass without reading any books.

Here’s my advice: Stop trying to read War and Peace. If you were going to read it, you would have done it already. At the beginning of last year, I tried an experiment where I tried to read books but only what I truly felt like reading. The result was that I abandoned most books pretty quickly, but I also finished more books than I had in years. Some were pretty frivolous. (And really, is a post-apocalyptic young adult novel more broadening than TV?) But I also finished more “serious” books than when I had tried to be disciplined. If you want to read more, maybe you should stop fighting with yourself.

Lesson: Sometimes you want a hybrid path. Here, the intended path is reading Serious Books and the desire path is drooling into your phone. The solution is to create a compromise path of reading whatever books you want to read. This is similar to how you can run more by carefully avoiding pain.

Many of us are addicted to the siren call of social media and the promise that if we click our glowing rectangles in the right places they might light up so that our brains produce a little hit of dopamine. Sometimes I feel like my life is a cycle of failing to work and checking Hacker News or whatever until I eventually fall asleep in existential terror at how I spent my day. Most people seem to face this problem to some degree (perhaps minus the angst).

A couple of years ago, a friend had just taken a long flight and was amazed at how efficient he was without access to the internet. He asked, “why can’t I recreate that environment elsewhere?”

For me, this is the most effective productivity tip: Physically unplug your router and leave your phone in the basement. You aren’t allowed to get them back until you’ve finished a task or a fixed amount of time has expired.

Lesson: If you don’t want to go where the desire path is going, put up a wall.

Say you’re the mayor of an American city and you have decided that you want people to drive less. One thing you can do, of course, is create more and better alternatives like busses and trains and bike lanes.

But, assuming that you’re the mayor of a city that isn’t New York, there will be some destinations where driving is much more convenient, meaning that people who can afford it will get cars. But once you already have a car, it’s pretty cheap and convenient to drive it places, so people tend to do that.

Lesson: It’s the relative appeal of the two paths that determines which one you take. You can equalize these by improving the intended path (making public transit better), obstructing the desire path (making driving worse), or a combination.

There’s one member of house Dynomight who is generally in excellent standing except for always always ALWAYS leaving lights on everywhere and all my attempts to counter this only seem to reinforce the behavior and know they’re reading this and laughing but I will have my revenge oh yes I will have it.

Erm, so in this case, the first thing I tried was asking that the lights not be left on. This worked about as well as putting up a sign asking people not to take a desire path usually works: Not at all.

A better solution is to make the desire path less attractive. So, with the consent of the offender, I tried a new policy: If I’ve already had to turn off a given light source once or twice in a day, I should instead unscrew the lightbulb.

This was annoying for me, of course, but it changed the incentives: Turning the switch off when leaving the room is much easier than screwing a bulb back in later.

I maintain that this theory was solid! But it didn’t work at all either: The response was to happily screw the lightbulbs back in whenever needed and never mention it or appear to be even slightly annoyed about it. I’ve considered motion sensors or timers but probably I should just give up?

Most grad students go home over the holidays promising that they will do research. But research is hard, so they stare at their computers for a couple of hours every day without working and constantly feel guilty and eventually come back from the holidays not having accomplished anything and also not having relaxed and recharged.

My advice is: Stop trying! You’re only hurting yourself by trying to work. Enjoy the holiday and trust that the rest will help you in the future.

Lesson: If you’re going to take the desire path no matter what, blocking it is counterproductive.

Colorectal cancer (CRC) is the 3rd leading cause of cancer deaths in the U.S., with around 53 thousand per year. If caught in the (early) localized stage, it’s highly curable, with 5-year survival rates of around 90%.

The best weapon to fight CRC seems to be colonoscopy screening. The logic is that CRC almost always develops from precancerous polyps which can be detected and removed before cancer has even formed. We don’t have randomized trials that prove that colonoscopies reduce CRC mortality, but Doubeni et al. used a fancy statistical technique (matched pairs) to try to estimate effectiveness from observational data, which suggests that colonoscopy screening reduces CRC mortality by around 70%.

Anyway, for the sake of discussion, let’s assume colonoscopies are effective and worth the risks. Let’s also assume that you don’t like drinking oral laxatives and having a doctor run a camera up your butt so, like 31% of Americans aged 50-75, you don’t get screenings. What’s the solution?

I don’t think there is one. You just have to force yourself to do it.

Lesson: Sometimes the paths can’t be changed. Colonoscopies are non-fun and can’t be made fun, but they are more effective than the alternatives and that’s that.

So, how can you react to a desire path?

An appealing option is to pave the path or accept that you won’t do things the “right” way and make what you’re already doing better. Similarly, you can improve the intended path or make it easier to do things the right way. Sometimes these are hard to distinguish.

A less attractive option is to block the path. It’s not necessary to put up a hard wall—all you need to do is make the “wrong” way of doing things nearly as annoying as the “right” way. You can think of this as an equation like

And sometimes, sadly, you can’t change the paths. The wrong option will always be there calling to you and you just have to ignore it.